It’s rare to have a client request a vehicle for a purpose outside of getting to the mountains.  Being so close to the rocky mountains, majority of our clients require a vehicle to get outside of the city to do a plethora of activities which are available to us just an hour away from our backyards which includes biking, hiking, climbing, skiing, snowboarding, camping, exploring etc. 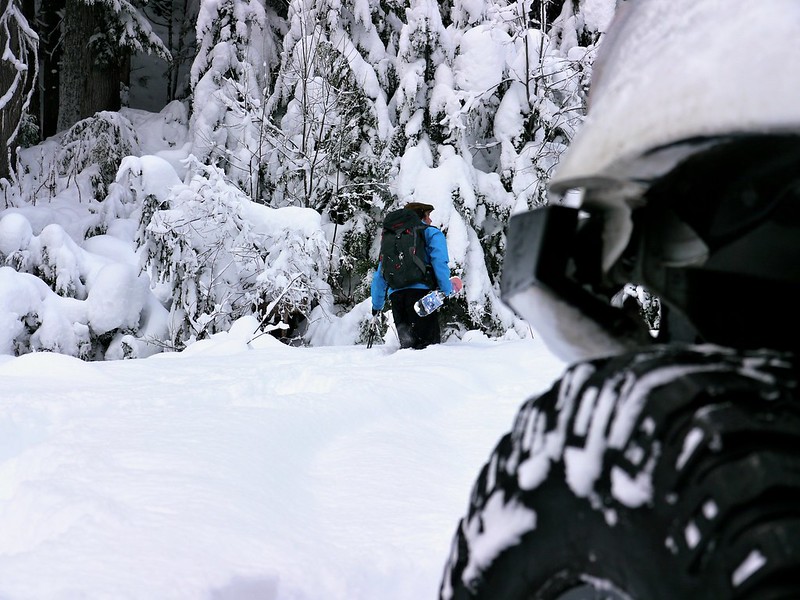 As apart of The Gear Shop EXPLORE division, we know this client very well and have created quite a few builds aimed directly at decreasing access time and increasing comfort and reliability of the vehicle.  This build started differently from the others.  Our consulting process began and it revealed our client’s premise of being able to push other vehicles out of the way to escape to the mountains in refuge in the event of a social collapse.   At first thought it might seem quite odd, however, deeper thinking into the consequences of a social collapse does make this build quite special. First image that pops into one’s mind when hearing about social collapse.

Our client reached out from the United States to seek our knowledge and build style as we originated a particular 4WD style which falls inline with what was needed for this project.  Some of you who know us well will know exactly the direction this build will take.  At concept this started with a blank slate.  No previous vehicle to work with, just a blank canvas to do what we’d like to create the ultimate bug out vehicle within a budget.  Now being able to push a vehicle out of the way on the freeway requires a few things.  In this scenario it’s important to start with a ladder framed vehicle to allow for a few protective upgrades to be bolted directly to the frame instead of a uni-body design similar to a CUV.  The vehicle choices were a Mercedes G-Wagon or a Toyota 4Runner.  Based on current market price of each vehicle and the upgrade costs, our client went with a 4th generation Toyota 4Runner V8.

We searched for quite a long time to find a few 4Runner candidates for us to inspect at the shop before recommending a purchase.  We went through about 5 4Runners and landed the right one.  4Runner acquired!  A fairly mint, black 2005 4Runner needing only a few basic maintenance items which Vic, our Journeyman technician in the MECHANICAL division of the shop, was able to take care of quite easily with Genuine Toyota parts.  The maintenance items included a timing belt, water pump, a radiator, front driver’s wheel bearing, and front pads and rotors.  This way the vehicle will be in excellent working order before making the drive back to the US after we finish the build.

Here comes the upgrade list.  Suspension we do our regular upgrade path for the IFS Toyota’s which includes the Total Chaos 2″ wider long travel kit with the lower race arms which yields 12″ of travel and additional clearance under the arms.  We combined it with the Fox 2.5″ Remote Reservoir Coil-Over for the ability to last in harsh winter and salt conditions.  This will be able to carry the additional weight of the front bumper and winch plus keep an extremely smooth ride over rough terrain at speed.  The rear we went with a progressive coil to carry 500LBS of additional weight from the rear bumper and tire carrier plus gear and combined it with the Fox 2.5 Remote Reservoir DSC adjustable shock to work with changes in weight in the cargo area.  We use a longer shock than normal as well to increase wheel travel and droop to increase the ability to keep all the wheels on the ground for maximum traction. 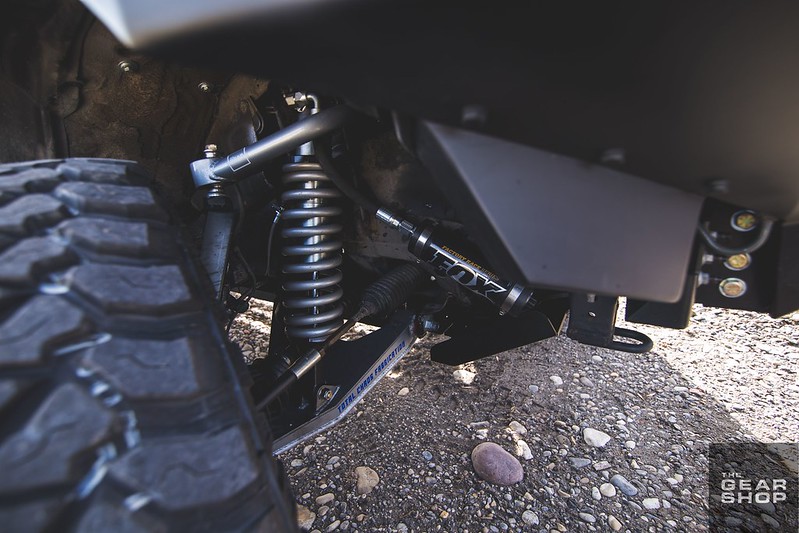 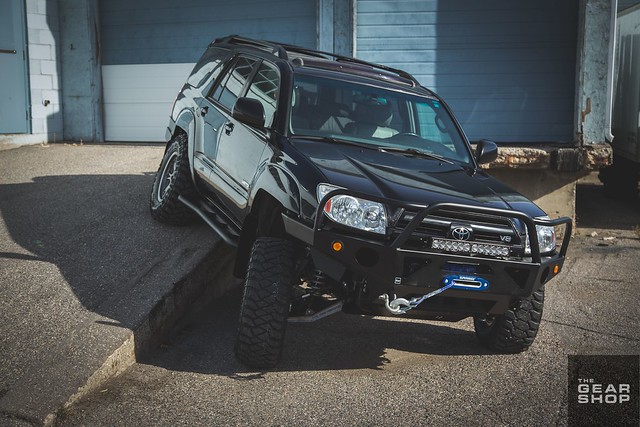 To keep the traction, the rear differential was spec’d with an ARB air locking differential which will ensure both rear wheels have equal power and traction when required.  Air is needed to activate the locker which we use a redundant system.  ARB’s compact compressor is used to ensure the locker will always have air and right next to it sits the ARB high output compressor for the tires.  We’ve seen the ARB high output compressor fail at the worst times which we separate it’s functions so the locker will  always have air. 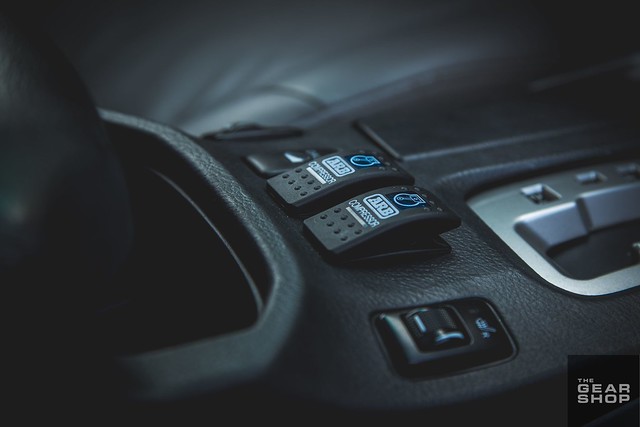 ARB Compressor controls for isolating the locker from airing up the tires. 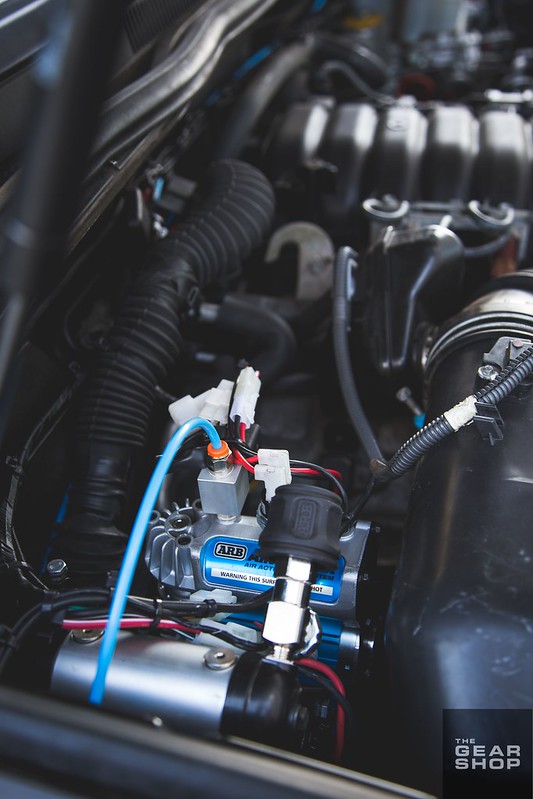 From the axles to the ground is equally important and in this situation we choose Hutchinson for their Rock Monster DOT bead lock for a few reasons.  1st we’ve been using this wheel since 2010 heavily and believe in it’s strength against the elements.  2nd, a person is able to take this wheel apart, dismount the tire, and remount a new tire on their own without a machine.  This is something I’ve done on the of Dusy Ershim in the middle of the night when the choice of using tire plugs was no longer an option.  Tire was changed in 20min.  Mickey Thompson MTZ’s were picked for their high silica compound, M+S (Mud and Snow) rating for mountain passes, and tread design for rocks and paddling though deep snow.  We’ve found this tire to stay round over time and have incredible cornering feel for an MT tire. 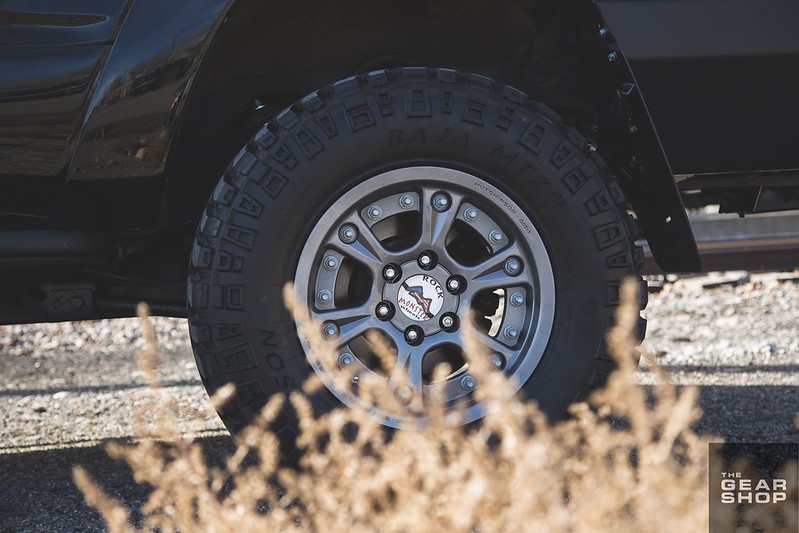 We’ve tried and tested this wheel combo since 2010

Underside vehicle protection we believe is one of the key fundamentals of the vehicle if it’s going to be used in severe conditions.  Full skid plates by Bud Built, including the gas tank skid, and rock sliders with the bump out to protect the sills and doors were added.  If it can handle the hardest trails filled with vehicle sized boulders, they will work very similar in the urban landscape.   For the front and rear of the vehicle, we’ve selected CBI front plate winch bumper and the rear bumper with swing out for a few reasons.  Protection and aesthetics.  CBI front bumper sticks out the furthest and is tucked up the highest out of the bumper options with the full light hoop.  The CBI rear bumper protects all the way up the side of the 4Runner while being able to carry the spare Hutchinson out back and two 20 litre fuel cans.  Now the 4Runner is taking shape into the ultimate vehicle which we’re used to creating. 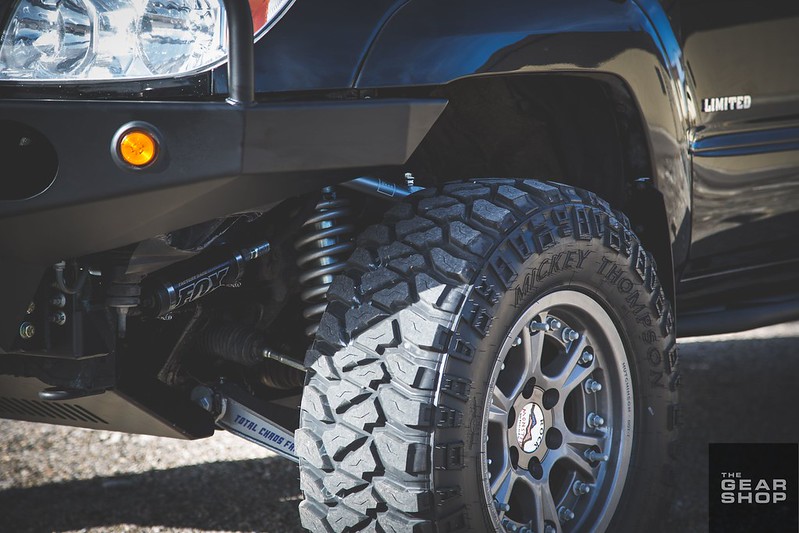 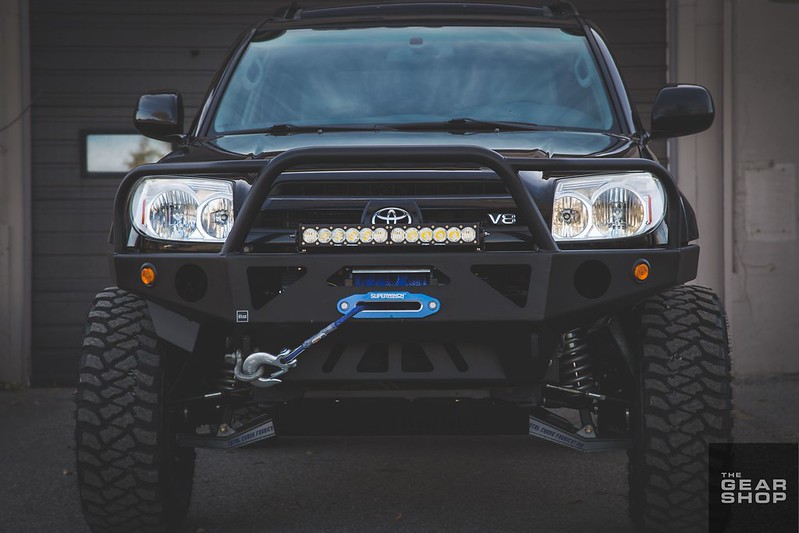 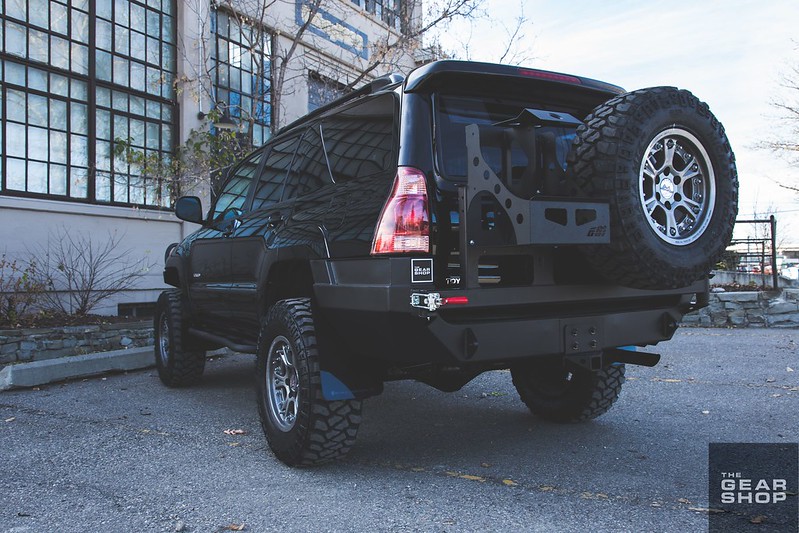 CBI Rear Bumper with Tire Swing Out and Twin Can Holder providing protection out back and additional gear capacity.

Inside the front bumper, we house the Superwinch 9.5 Talon Series winch with synthetic rope.  Few of the reason’s why we moved our offerings more towards Superwinch is Bill Burke made it well known to me that Superwinch or bust but this was in 2010 and it didn’t quite register until we’ve worked with almost every major winch manufacturer possible since.  The Talon series is IP rated, solid state solenoid, and it’s brake is external which means it can hold 9,500 LBS when stopped versus other winches can stop around half it’s capacity with an internal drum brake under the rope.  Let alone it’s build quality and clutch system is top notch.  On top of the bumper we spec’d out Baja Designs OnX 20″ LED bar to punch through the darkness. It is the only LED bar with the distance equivalent to two 220mm 60W HID Spot lights in this size. 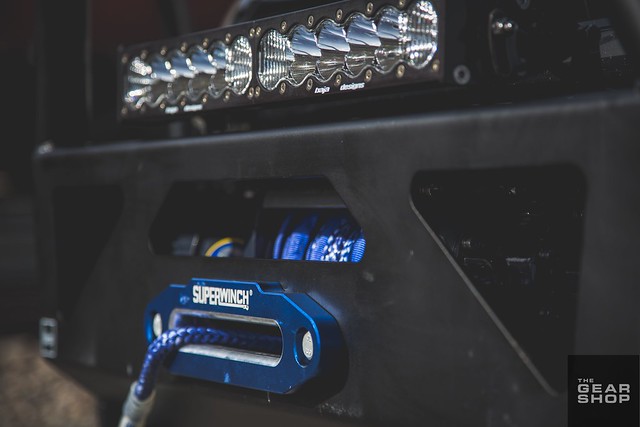 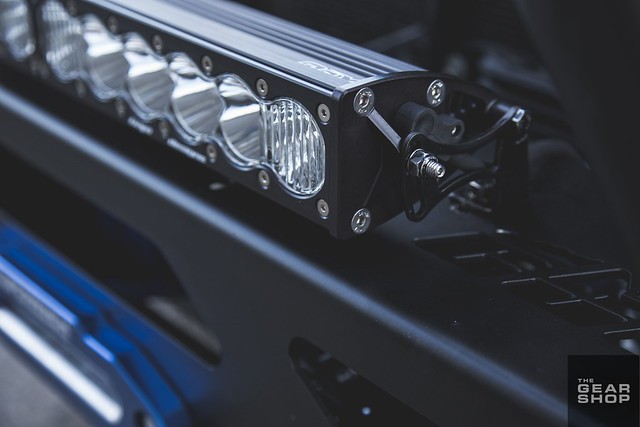 Genny, our Journeyman welder, had to create a few components for this to come together properly.  She created our very first fabricated product which is the GS Windshield Washer Bottle Skid for 4th Gen 4Runner owners using a metal plate bumper.  There’s nothing on the market and this one we designed to be aesthetically pleasing matching the lines of the plate bumper while maintaining angles of a stealth bomber.  Next are front coil over can holders as the washer bottle is an issue on the passenger side.  Two remaining items under the hood is the ARB compressor bracket for both compressors and the winch solenoid box.  She made quick work of creating strong and sleek mounts. 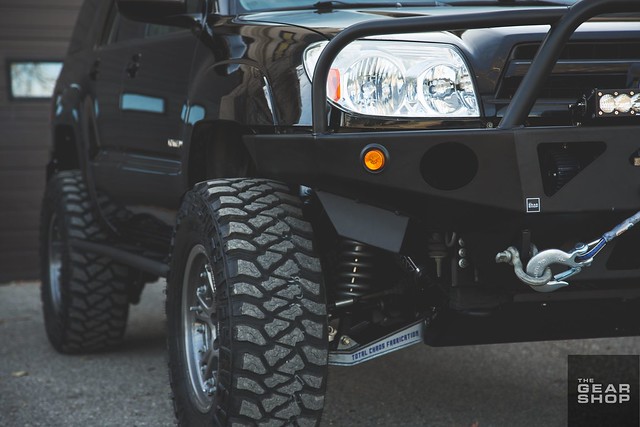 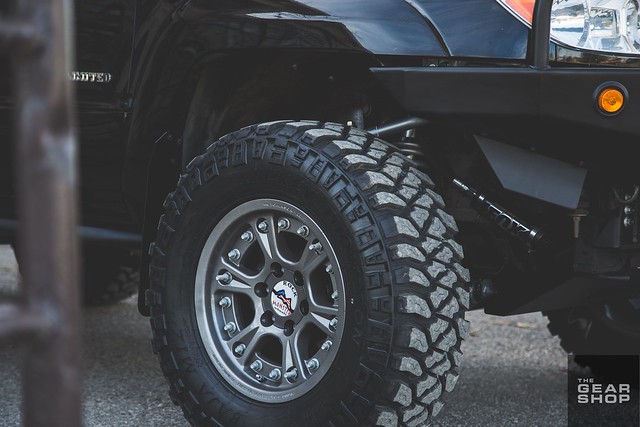 Similar to a first aid kit, using it properly requires some training.  We put the owner of this vehicle through The Gear Shop Driver’s Training which was an intensive program to use the recovery equipment safely along with the ability to pilot it over the obstacles in the concrete jungle.  By the sounds of it, looks like she’ll also come to Moab with us to enjoy the lighter side of what this amazing 4Runner has to offer!  After the shakedown process we can honestly say the 4th Generation 4Runner is a solid platform for any adventure.

We hope this 4Runner brings a solid piece of mind to our client and her family as it will provide the ability to escape to the mountains for any reason.  This is a build style we’ve been creating since 2010 and we continue to evolve our builds by using them in difficult conditions and testing almost every high quality applicable upgrade on the market for our clients.

We have another 4Runner build in the wings for an avid climber and caver.  There’s quite the story to this one so stay tuned!

Photo dump from the photo shoot with Tamarack Media Co. 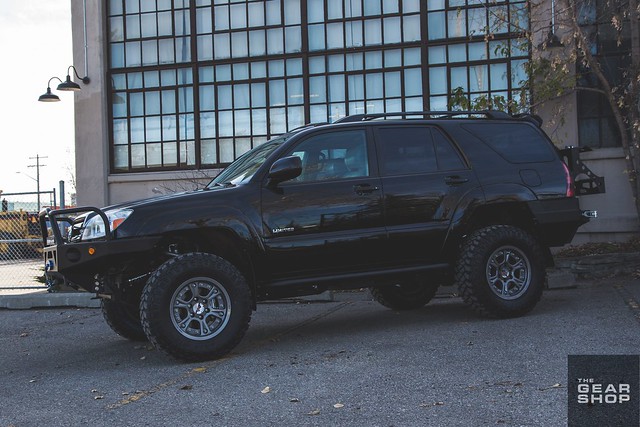 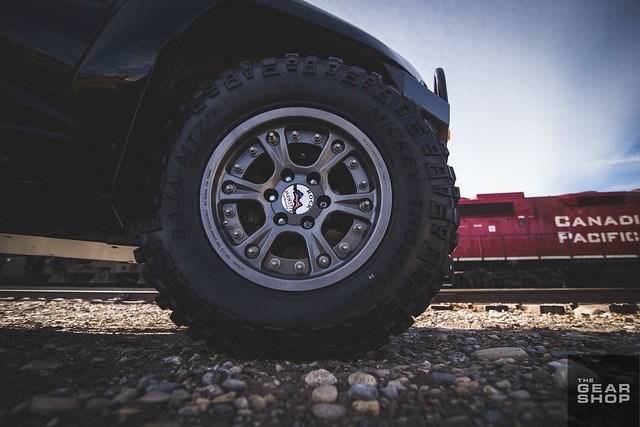 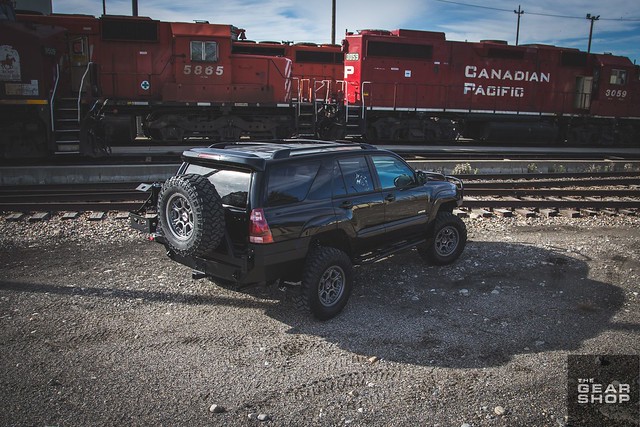 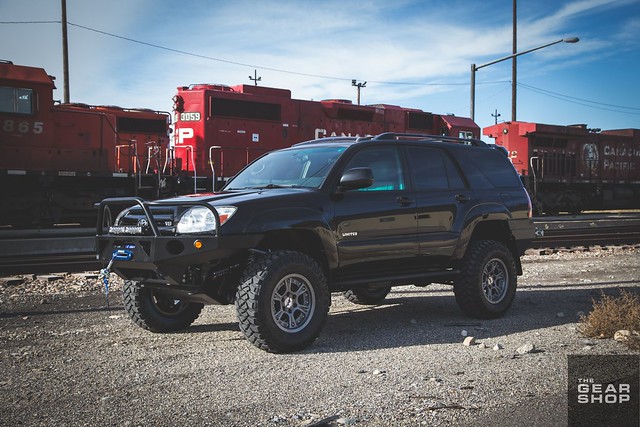 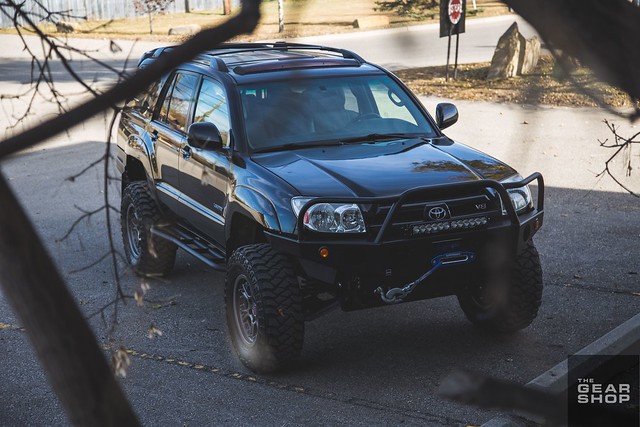